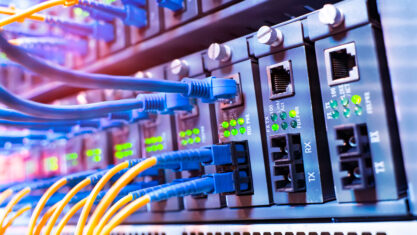 The federal government published its annual update on Canadian telecom prices, revealing (to no one’s surprise) that Canada’s internet prices are climbing and are more expensive than international comparisons.

Consulting firm Wall Communications prepared the report for the government. The report splits internet speeds into various service levels ranging from 3-9Mbps at Level 1 to 500Mbps or higher at Level 7. Between 2019 and 2021, the average home internet prices in Canada increased at every level except Level 2 (10-15Mbps). It’s worth noting the federal government wants to connect all Canadians to the internet with at least 50Mbps download speeds by 2030 — that would land in the Level 4 category.

Prior to 2019, home internet prices were actually on a downward trend thanks to the CRTC’s wholesale rates decision. However, the Toronto Star cites critics from independent internet service providers (ISPs) and from wholesale internet lobby group Competitive Network Operators of Canada (CNOC), who blame rising costs on the CRTC for changing that decision.

As a quick refresher, wholesale rates are set by the CRTC and determine the cost independent ISPs pay to incumbents to access their network and resell it. The CRTC decided to implement lower wholesale rates in 2019 after three years of interim rates based on what incumbents claimed it cost them to operate their networks. The commission determined incumbents had overstated operation costs to inflate wholesale rates — some ISPs, like Teksavvy, accused incumbents of inflating the rates and then undercutting ISPs by offering customers special prices ISPs couldn’t match.

In 2021, the CRTC reversed its decision and reinstated the interim rates, claiming it made errors in the initial decision. Although the CRTC didn’t make the switch to the lower rates, CNOC attributes a decline in the market share of independent ISPs to the CRTC’s policy flip-flop. Moreover, several ISPs lowered prices and later raised prices because of the decision and reversal.

Interestingly, the data detailed in one of the report’s charts showed that wholesale-based competitors generally offered lower average internet prices than incumbents, at least in the lower levels. Level 2 through 5 internet ranged from about eight to 18 percent cheaper on average across Canada, while Level 6 and 7 was about 15 percent more expensive on average. Incumbents didn’t have Level 1 plans for the comparison.

Things change at a regional level, with some provinces (like Ontario) offering lower wholesale prices at Level 6 and 7.

Looking internationally, the report compares internet costs between Canada and other G7 countries, plus Australia. We’ll focus mainly on Level 3 and up since most other countries didn’t offer Level 1 or 2 plans (except Japan, which was usually more expensive than Canada). 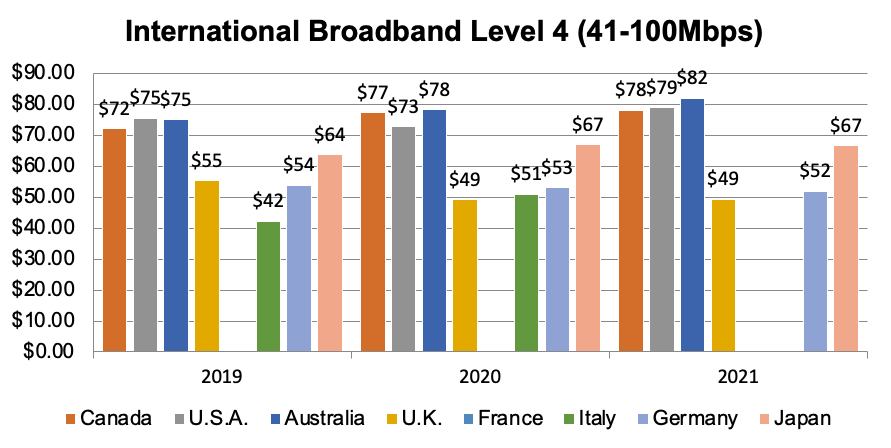 Starting at Level 3, Canada’s average price is higher than every other comparison country except Japan. The cost for Level 3 internet in Canada is also $11 more than it was in 2019. For Level 4, Canada is the third most expensive behind the U.S. and Australia.

At Level 5, 6, and 7, Canada has the highest internet price, often by a significant margin. It’s worth noting that the U.S. price at Level 6 and 7 is almost the same as Canada’s, while other countries range from about $10 to $50 cheaper. 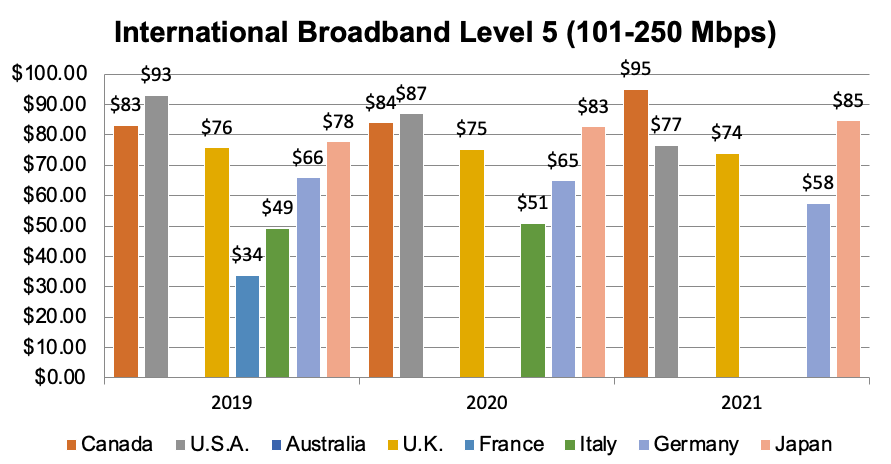 The report also looks at mobile plan pricing, where again, Canada’s price is among the highest out of G7 countries plus Australia. At almost every plan level, Canada is among the top three most expensive, with usually only the U.S. and/or Japan ahead of it.

(Note that mobile plans are quantified from Level 1-7 as well, but based on the amount of data rather than speed like with broadband.)

You can view the full report here.

Pope appeals to Putin to end ‘spiral of violence’ in Ukraine

Israeli leader welcomes US proposal for sea border with Lebanon