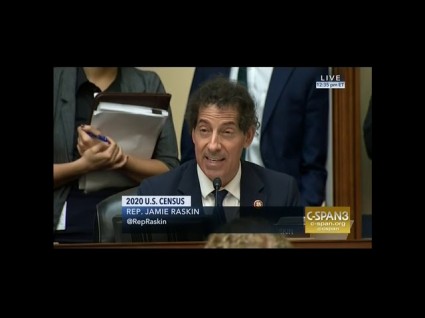 A new stash of Commerce Department documents obtained by Congress has confirmed that the Trump administration pushed to add a citizenship question to the census to help Republicans win elections, a House committee report said yesterday. Via the New York Times:

The report from the Committee on Oversight and Reform, the culmination of a yearslong investigation, detailed new findings based on drafts of internal memos and secret email communications between political appointees at the Commerce Department, which oversees the Census Bureau, and counterparts in the Justice Department.

The documents provided the most definitive evidence yet that the Trump administration aimed to exclude noncitizens from the count to influence congressional apportionment that would benefit the Republican Party, the report concluded, and that senior officials used a false pretext to build a legal case for asking all residents of the United States whether they were American citizens.

Things you Should Know About Critical Illness Insurance Policies

Dozens dead from Ian, one of the strongest and costliest US storms